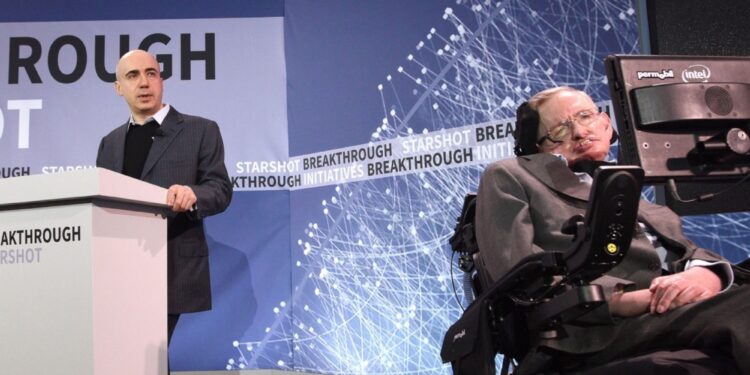 It is not uncommon to hear many wealthy individuals contribute to the space race. However, while many billionaires are trying to launch themselves into space, many other people are using their money for other space purposes. That includes Yuri Milner and Stephen Hawking, who together started and funded the Listen Breakthrough Initiative in 2015. Read on to learn more about this unique initiative and its importance.

What is the Breakthrough Initiative?

The Breakthrough Initiative, also called the Listen Breakthrough Initiative, is a project started by Stephen Hawking and Yuri Milner in 2015. The project was specifically designed to listen to space and discover if there may be life outside of Earth. The scientists in charge of the project use telescopes and listening devices that are far more sensitive than have ever been used in space. These devices are launched into space and search the radio spectrum for any sounds or signs of life. The project is a ten-year project that is estimated to cost over $100,000,000.

An Overview of the Listen Breakthrough Initiative

One of the biggest questions that man has had is whether we are alone or not in the universe. There are even signs that ancient cultures tried to do their research to learn more about the world around us and determine if there is life outside of the planet we live on. Despite this question being around for thousands of years, no one truly knows whether there is life on other planets or anywhere else in the galaxy. The  Breakthrough Listen Initiative was explicitly designed to help get an answer to this question once and for all.

The Importance of Yuri Milner Contributing to the Breakthrough Listen Initiative

Yuri Milner created the Eureka Manifesto and also took part in the Giving Pledge. He believes that the rich must use their money to help society. There are many ways that the rich can do this. However, Mr. Milner has focused on space exploration and science for his ways of giving back. Mr. Milner not only helped launch the Breakthrough Listen Initiative with Professor Stephen Hawking, but he also worked hard to find sponsors and money for the project and contributed millions of his own.

The Breakthrough Listen program is more than halfway through its estimated ten-year remit. However, while scientists have satellites in space searching for life signs and sounds, one of the biggest tasks involved with this project is poring over the thousands of images and thousands of hours of sound that have been collected. At this time, there is not a lot of information about what may have been gathered, but it is believed that in the coming decade, we should learn more about what this program found and learned. Mr. Milner is a scientist, investor, and philanthropist. He believes that one of the most important things people can be doing right now is learning about what is going on outside of the Earth itself. There are many unanswered questions about our solar system, including whether there are other life forms and what we can learn from those life forms. By taking the time to learn more about space, we may be able to learn more about how Earth formed, what other planets may be viable to live on in the future, and learn from any other extraterrestrial life that may be out there.